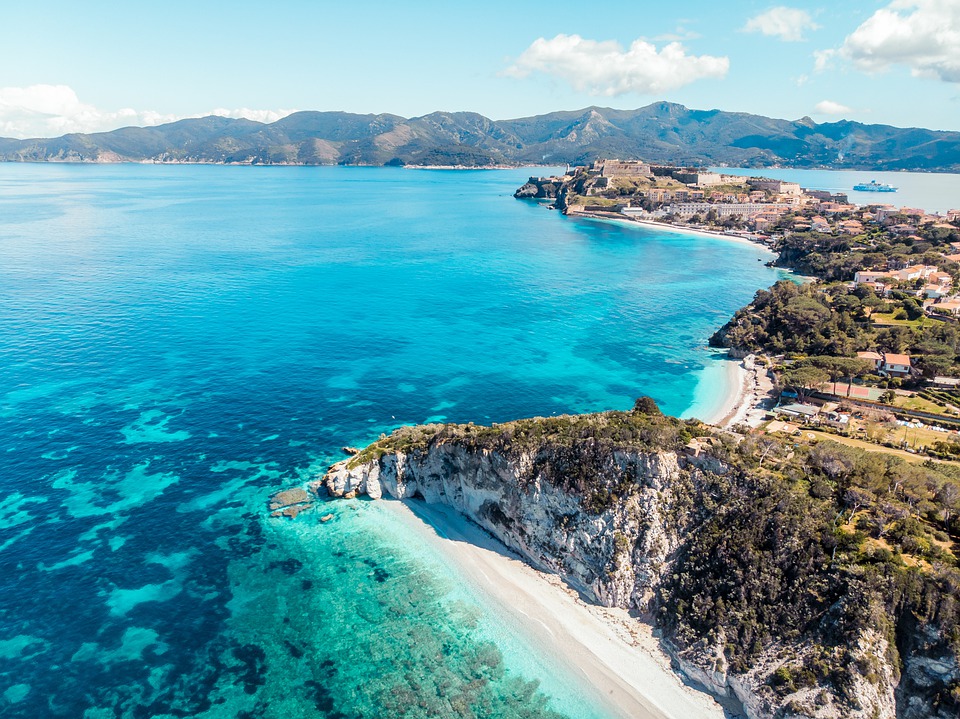 Island of Elba: where the sea meets the legend

By Emanuele Finardi19 April 2021No Comments

Dylan Thomas writes at the end of one of his best known youth short stories, In the direction of the beginning: “Whose was the image in the wind, the print on the cliff, the echo knocking to be answered? (…) She moved in the swallowing, salty field, the chronicle and the rocks, the dark anatomies, the anchored sea itself.”

The Island of Elba both for its natural landscapes and for its history, from the Etruscans to Napoleon and beyond, has always exerted a great fascination on poets and writers from all over the world. And often the most important imprint was left by short stays: like the one, which lasted nine months, of Napoleon Bonaparte, or the one, which lasted even less, a month, of the Welsh poet and writer Dylan Thomas, who, coming from Florence in July 1947, chose it as the place for his spiritual landing and inspiration.

Dylan Thomas on the Island of Elba

Thomas arrived on the island in the wake of “Death and Entrances” the book that, six years after the publication of “Portrait of the Artist as a young dog”, in 1946 represented his final consecration, Thomas found on the Elban soil the absolutely concrete and at the same time fabulous suggestions of his small homeland, Swansea: with its crowded interiors, the winding streets, the hills of vegetable gardens and farms, the mines, the friendly and enemy wind, the wild aromas of the countryside, the sincere flavors of the sea. The Welsh poet felt at home in the taverns of Rio Marina, sipping Aleatico Passito, an ancient and precious wine suitable for meditation, and discovered himself enchanted by stockfish alla riese, a poor and sublime dish of Ibero-Moorish origin where cod is accompanied by salted anchovies, onions, tomatoes, green peppers, black olives, pine nuts and capers; a dish that, together with the gurguglione – stew of vegetables, peppers and eggplants – has been for centuries the banquet of miners and farmers who went to work. And for sure, given its well-known predilection for alcohol content, it will also have delighted the palate with the schiaccia briaca, the Elban dessert par excellence composed of raisins, pine nuts, walnuts, almonds, hazelnuts, oil, wine (Aleatico) and alchermes in generous quantities.

In addition, the poetry of Thomas is an explosion that feeds on myths and such hunger in Elba could certainly be satisfied. Many of the most important places on the island are in fact linked to legends passed from mouth to mouth: such as the “Spiaggia dell’Innamorata” that still breathes the feeling of Lorenzo and Maria, two young people from Elba whose love was opposed by their respective families, or the “Seduta della Madonnina” at the sanctuary of the Madonna del Monte, a small circular depression where, according to the Vulgate of Elba, the tired Madonna would sit. But in this patchwork that over the years on the island has mixed local folklore, pantheistic vocation, and legend in a heady vortex of images, the place of honor certainly deserves the legend of the Argonauts.

The legend of the Argonauts and the submerged city

Due to the working of granite, which dates back to Roman times as evidenced by the numerous works scattered in the most important Italian and foreign cities, and the extraction of iron and other minerals dating back to Etruscan times, on Elba still today streets, beaches and even the facades of the houses shine not only the reflection of the sun, but also that of Argos.

It was from the fifties and sixties of the last century that people began to talk about the presence of a submerged city off Capo Bianco and also of a mythical Argo Port of Greek memory right in front of the Ghiaie Beach, one of the most beautiful of the island with its beautiful seabed and crystal clear waters. According to the popular story, the very white pebbles, smoothened by the sea, that characterize the beach, due to the sweat of the Argonauts, were spotted black, peculiarities that continue to have today. Net of the vox populi, the researches that have been carried out have actually revealed the presence under the veil of the water of a large complex, which seems to be partly natural and partly human work, composed of imposing walls sometimes combined in parallel not many meters apart. Is it really all a joke of nature or is it really Argo?

Although the querelle on the origin of the “submerged city” is still open today, we like to think that even though far from his tomb in Swansea, ploughing the sea, it was the indomitable spirit of Dylan Thomas that created this underwater miracle: like Thomas’ poetry, a creature that at times appears as a real planet in its own right, a human and natural artifact together with which it is not possible to embank, apply a sifting of codes, impose a discipline. Signs that reveal the presence of Argos on the Island of Elba between Genesis and fairytale, Apocalypse and nursery rhyme, in a vision that grabs reality back by the hair to give it new life elsewhere. Imagined place where fears, loves, exultation, nostalgia, animal joy, ignorance and mysteries, in short everything we know and don’t know, find their place in the world.

If you don’t believe us, if you’re not convinced that following Dylan Thomas you can discover Argos from the beach of Elba, the Welshman’s story of Swansea we started with closes like this: “One voice then in that evening travelled the light and water waves, one lineament took on the sliding moods, (…) one venom crawled through foam, and from the four map corners one cherub in an island shape puffed the clouds to sea.”