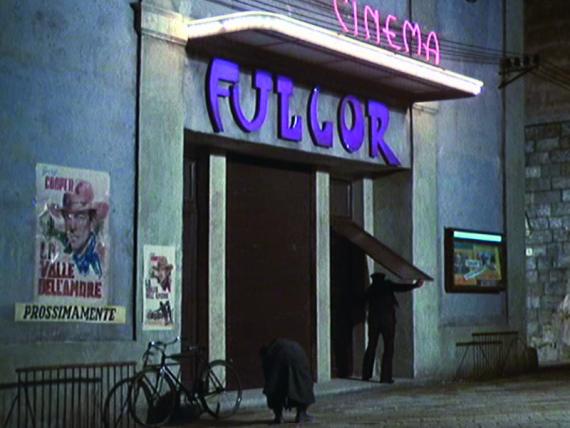 Fellini and Rimini: the maestro is once again sitting in the “Fulgor” cinema chair

I make a movie the way I live a dream. The greatness of Federico Fellini and his cinema is within this sentence, outside of time and space but with its disconcerting timeliness. It would seem strange to think so, when the adjective “Fellini’s”, which made him proud and embarrassed at the same time, refers to an epicurean but melancholic dimension that already contains within itself the regret of what has escaped; but his wide, almost indolent narrative mode, that gait of the story by pictorial brushstrokes is always with us, today and probably forever.

Who knows what Federico Fellini would think of this strange anniversary, the 100 years of his birth celebrated last January 20, 2020. He who defined himself as “a craftsman who has nothing to say”, if for a dream game he was still alive in the flesh he would probably be surprised by the clamour with which his hometown and the whole Italy have remembered him; he would certainly be happy to walk again in the heart of the affection that the people of Romagna keep for him, the same affection he felt for the city.

Although he left Rimini in 1939, heading for Rome, to pursue the dream of cinema, Fellini never left the land of Romagna completely and always felt for “his country”, as he defined it, a feeling of nostalgia that he often translated as an evocation in his films. If he never expressly took the town back in any of his works, throughout the entire Oscar-winning film production Rimini has always represented an irreplaceable source of underground, hidden, unconscious inspiration. Rimini pulsates in some moments of “Amarcord”, but also in “Vitelloni”, in “La voce della luna”, in “8 1⁄2” and other films. Not only that, Rimini is even in the subjects left on paper, in the photographs, in the interviews, in the intentions: perhaps it is the film that Fellini has never made, but that in reality he has always shot of subtext.

The itinerary to discover Fellini’s places

“Rimini is a dimension of memory” he used to say. And it is memory, transfigured by the creative force of the great director, the track to follow to savour the soul of this city: just devote yourself to Fellini’s sign of “everything is imagined” and Rimini will turn into a great film set wrapped in poetry.

Perhaps starting from the City Museum where you can see the “Book of Dreams” up close, in which the Maestro has transcribed and illustrated his journeys for over thirty years, a subject of inspiration for his subjects; or stopping at Palazzo Gambalunga, in the street of the same name, at number 27, to consult and touch original documents, stage photos, drawings, scripts, publications.

And, after a quick passage from his birthplace, in via Dardanelli (not open to visitors), in a few minutes walk you arrive at the Fulgor cinema, inside Palazzo Valloni, a neoclassical building with a beautiful Art Nouveau facade. This is the place where little Federico, seated on his father’s legs, was the protagonist of the great films of the time, such as “Maciste all’Inferno”. It is here that Titta, the protagonist of Amarcord, clumsily attempts to seduce Gradisca. It was here, in other words, that everything was born.

Renovated and brought back to its ancient splendour thanks to the scenic setting by Oscar-winning Dante Ferretti, the Fulgor contains all the signs of Fellini’s poetics: as soon as you enter, you discover a warmly coloured entrance, with curved wooden volutes, brass planks and a sinuous and beautiful staircase that recalls the curves of the Gradisca leading to the gallery; then, on the ground floor, the foyer and the two cinemas “Giulietta” and “Federico”, inspired by the 1930s Hollywood style. More than a restoration, the restoration of the structures of the Cinema Fulgor in Rimini was a careful work of aesthetic restitution aimed at recreating, inside and outside, the atmospheres so dear to Federico Fellini: an evocative, rich, enveloping emotion, typical of those ageless narrations.
From Fulgor, on foot, you can then reach the old village of San Giuliano, an old fishermen’s quarter born around the year 1000 and favourite place of Federico and his Giulietta (Masina): these are the streets where, hand in hand, they often came to walk, perhaps even ideally dancing like Ginger and Fred among the many murals that tell the story of the Master’s cinematographic path.

To complete the toponymy in pure Fellini style, it is definitely worth taking a walk in the park named after the Maestro, dominated by the fountain of the Four Horses and overlooking the legendary Grand Hotel. Inaugurated in 1908 in the middle of the Belle Époque, and proclaimed a national monument in 1994, the Grand Hotel represented, for the young Fellini, the symbol of forbidden desires: it was the fairy tale of wealth, luxury, magnificence; in his maturity, he stayed there every time he returned to Rimini and the same suite was always reserved for him, number 316 (still dedicated to him) where he was struck by his fatal stroke in August 1993.

Fellini in the imagination

If the Grand Hotel, like Rimini as a whole, exudes Fellini’s genius and imagination, it is impossible, from this shore, not to look at the horizon without seeing the legendary transatlantic liner Rex in transit, as shown in the beautiful nocturnal sequence of “Amarcord” when full of lights mysteriously emerges from the darkness. Although the scene was reconstructed in Cinecittà’s studios, the Rex now belongs to the Romagna sea, the Grand Hotel and Fellini, so much so that the director and his beloved companion Giulietta rest in Rimini’s cemetery under the “great bow”, a bronze sculpture made by Arnaldo Pomodoro.

It is said that Fellini often changed his perspective on the set following his instinct. Here, in front of the Grand Hotel, this oblique and visionary look towards the waves will be completely natural, welcoming and fascinating. And, inside a film or a dream, you too, like Federico, will find yourself exclaiming: everything passes, everything is life!