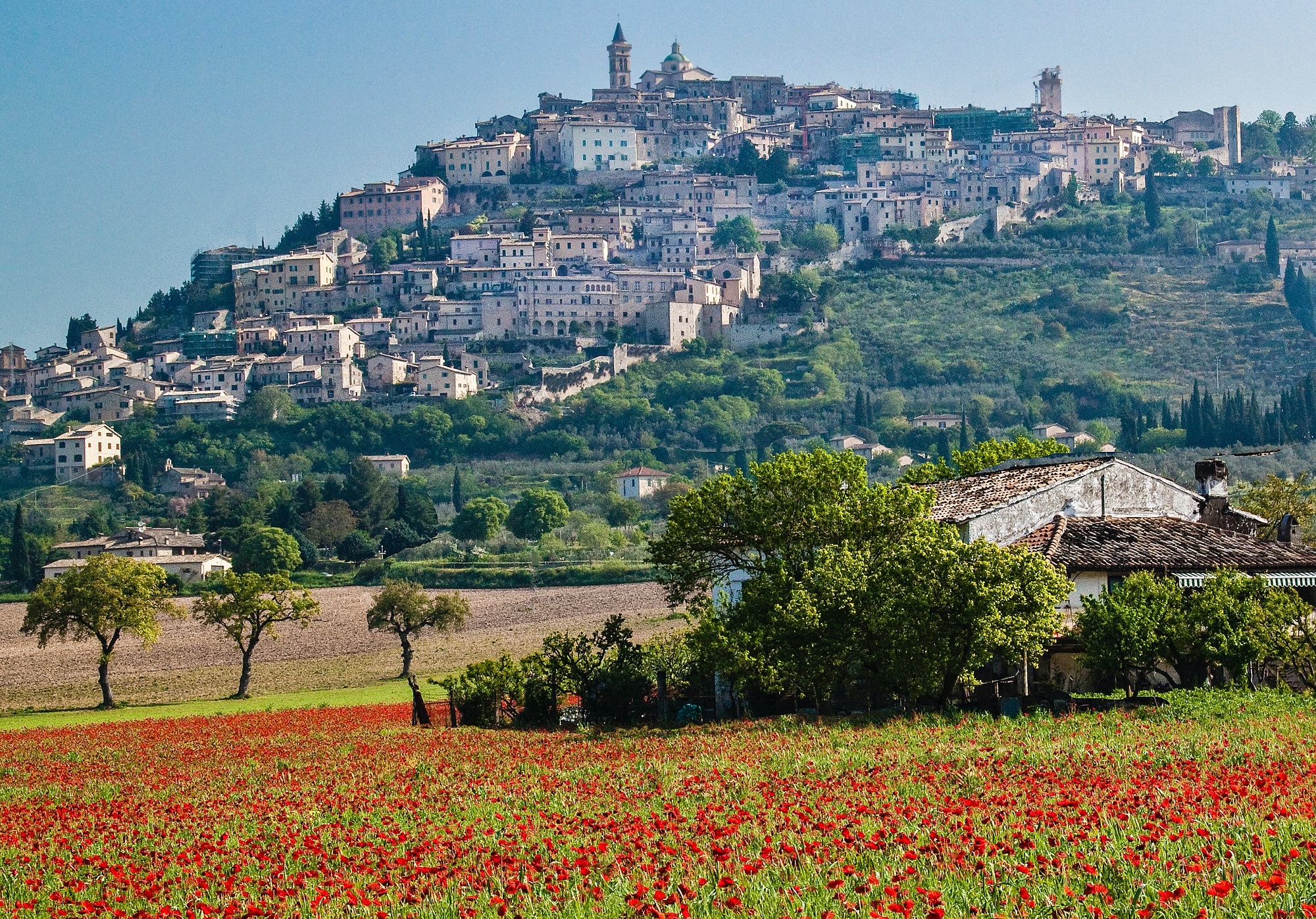 Byron and sublime Umbria: a short but intense love story

“The great object of life is sensation – to feel that we exist, even if in pain. There is an ecstasy...there is life where no one intrudes: it is not that I love man less, but Nature more. ”

In these words, we find the deepest sense of the love story between Lord Byron and Umbria and the nature it offers him as if it were the most precious of gifts. Nature with which Byron wanted to become one in order to find the truth of things. “To merge with the universe and feel it there”.

Umbria is an area that, despite its not immense size, offers itself to tourists as a remarkable resource in terms of culture, history, and landscape. It is no coincidence that its landscape – thanks to the infinite expanses of hills, tinged with emerald green, its many medieval villages, and the imposing waterways that “stain” the territory – has been the inspiration for poets and writers, from Virgil to Byron.

Charged with several scandals such as incest, adultery, sodomy and homosexuality, the young George Gordon Byron (known to the general public as Lord Byron) was forced to leave his homeland in 1816 in a desperate attempt to save his reputation. The rebellious poet took the example of those who had left their homeland for the same reasons, choosing Italy as a safe haven. What was supposed to be a simple refuge soon turned into a love affair; Byron was so enchanted by the beauty of the peninsula that he decided to travel the length and breadth of it, first Venice, then Florence and then Genoa, on a Grand Tour. During his journey to Rome in March and April 1817, he had to pass through Umbria, a region unknown to him. He came face to face with a wild and unspoilt landscape, which unleashed his romantic soul and forced him to stay longer than planned in order to observe its hidden beauties with more dedication. He decided to immortalise this spiritual encounter by dedicating eleven stanzas, one hundred lines, to Umbria in his famous narrative poem “Childe Harold’s Piligrimage”.

In his verses, he wrote about three places, in particular, three great natural pictures that all have one element in common: water. These encounters are not the result of chance: water is the origin of all things in nature, a nature that Byron (as a good romantic poet) venerates and loves, and it is the source of human life: that life which Harold, the young protagonist of Byron’s story, is trying in every way possible to recover, and which for many years he has left in the grip of chaos.

Returning to the water for Byron, through Harold, represents the possibility of resetting his existence and starting again to write his own story, in the hope of finding himself again after years of ‘perdition’ acted but also suffered.

A ‘redemption’ that would only come about in part. From the chronicles of the time, we learn that, despite his efforts, Byron never completely abandoned his taste for transgression. And perhaps he already knew he could not change while he was observing one of Umbria’s great natural heritages, the Marmore Falls: “She advances /As if an eternity to swallow /Everything she meets, of fright the eye /Beating, incomparable cataract/ Horribly beautiful”. His words echo the terrible, which frightens us but attracts us with its force; and we, like him, observing this imposing waterfall (one of the highest in Europe, with a height of 165 m) more than two centuries later from the footbridge of the lower Belvedere, feel the exact same sensations: if on the one hand, we have the presentiment that at some point it may overwhelm us, on the other hand, we remain fascinated by it, cautiously continuing to observe it. It is that disturbance that the Romantic intellectuals described as the Sublime: the awareness of being helpless in front of the force of nature but being able to enjoy its attraction while keeping the right distance, driven by the instinct of self-preservation.

After the Marmore Waterfalls, the crossing of Umbria led Lord Byron to the Fonti del Clitunno. Located on the Via Flaminia, between Spoleto and Foglino, they are a true corner of paradise on earth, so much so that they can boast a very long list of literary quotations, starting with Pliny the Younger who wrote to a friend: “Have you ever seen the Fonti del Clitunno? If not yet, and I think not, otherwise you would have told me about them, go and see them. I saw them recently and I regret that I did so too late”. Obviously, the springs mentioned by Pliny are not the same as the ones we can admire today; they changed their appearance after a strong earthquake in 444 AD, but the evocative power of the place remains intact and impressed Byron himself. In particular, a few steps away from the springs, there is a small sacellum in the shape of a temple, an early Christian building dating back to the 5th century, which has been on the UNESCO World Heritage list since 2011. A sanctuary dedicated to the river gods, referred to by Byron in his writing: “the sweetest wave / of the brightest crystal / that ever offered refuge to a river nymph“.

The third natural place that establishes the relationship between Byron and Umbria is Lake Trasimeno. Since prehistoric times Trasimeno – thanks to its climate, its extension, and its Mediterranean scrub – has been a favourable place for the settlement of the various populations that have followed one another over time. For Byron, the banks of Lake Trasimeno represent the memory of the past and the history of the people who have lived there. It is here that, rewinding the thread of time, Byron rereads the torments and fate of Caius Flaminius on a foggy morning in 217 B.C., during the Second Punic War. It is in fact in Tuoro, on the shores of the lake, that Caius Flaminius, consul of the Roman legions, is preparing to suffer one of the most searing defeats in the entire history of the power of the Roman Empire at the hands of the Carthaginian Hannibal, who will be able to annihilate him thanks to his tactical skill and cunning. Lord Byron pondered this as he observed the “silvery” expanse of Lake Trasimeno: he thought about war and its consequences. He thinks about death and devastation. How many deaths in a place that has given so much life for centuries. Water is life, death is non-life. He wrote: Now Trasimeno offers a very different scene; its lake is a silvery mirror, and the plain is not pierced by any wound but by the peaceful plough […].

Three places. Three moments. Three dazzling visions given to us by nature and enlarged by poetry. Through these three “environmental pictures” Byron leads us to the discovery of a land that sums up the evocative power of the whole of Italy. Armed with wonder and curiosity, we can find this greatness by staying off the classic itineraries: not limiting ourselves to just seeing, but learning to really look, because beauty is everywhere.