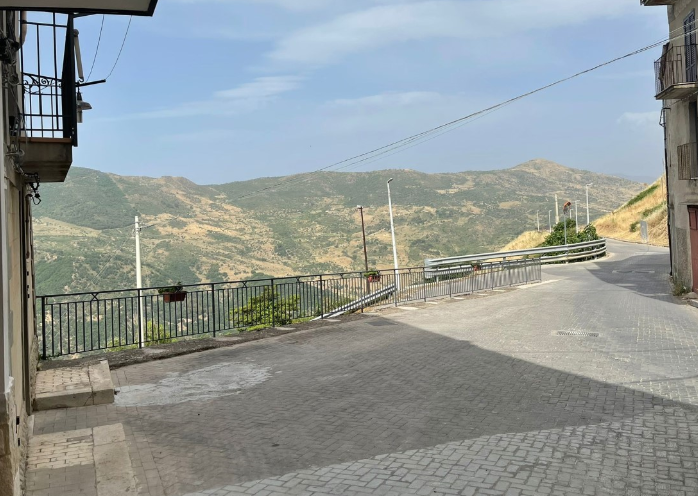 Beauty can also be found where something beautiful happens: between poetry and regeneration in the little Paolo Prestigiacomo square, in San Mauro Castelverde

Regeneration spaces between culture and change: the case of San Mauro Castelverde, the Sicilian village that acquires a new identity through poetry

We continue our journey to discover Civic Places, the places of civic engagement awarded by Fondazione Italia Sociale, but we stay in Sicily. Today we tell the story of San Mauro Castelverde, a small village in the province of Palermo, and in particular of one of its squares, Piazzetta Paolo Prestigiacomo, which has been transformed from an anonymous place of passage into an engine of culture and innovation for the whole town.

The town of San Mauro Castelverde is a small mountain village within the Madonie Park with just over 1,000 inhabitants. For decades it was known only for being one of Palermo’s main mafia districts, but what many people ignore is the connection this town has with poetry.

In fact, Paolo Prestigiacomo, a little-known poet and writer who is certainly among the most significant figures in Italian literature of the second half of the twentieth century, was born here in 1947.

And it is precisely the small square and the Poetry Festival dedicated to him that have been transforming the entire village in recent years. To best tell the reality of San Mauro and the Paolo Prestigiacomo Poetry Festival, we asked a few questions Fabrizio Ferreri, an author and lecturer who works with many others on the cultural revitalization of the village.

The rediscovery of Paolo Prestigiacomo, “maurino” poet and writer, as a proponent of cultural regeneration space

How would you describe San Mauro Castelverde and the whole reality behind the Paolo Prestigiacomo square?

The slogan that represents us, and which has become an expression of the great evolutionary phase of the borough of San Mauro Castelverde, is “from the mandamento to change.”

Prestigiacomo’s literary work, with the Festival that has been built around him, has become the occasion and the tool to read the Maurino territory with new eyes, to think of ourselves from a different perspective, to look at ourselves from the outside but not through a foreign eye. The work on the figure of Paolo Prestigiacomo has become, and is becoming, the open space of a communion, a lever of self-consciousness, of self-construction and re-construction of a community.

The process of cultural regeneration: from idea to implementation

When and how did the idea of transforming a square into a meeting place and cultural valorization come about?

The small square, thanks to the Paolo Prestigiacomo Festival, has been transformed from an anonymous place of passage to a space of artistic and social design with a value of response and revenge toward the internal and macro-systemic dynamics that fatally cooperate in the direction of the progressive marginalization of mountain villages like San Mauro Castelverde.

The idea of valorizing the small square and in general promoting a transformative process of cultural regeneration of the village is due, as is often the case, to an interweaving of scattered factors that suddenly find themselves side by side, mainly: the desire of nationally renowned poet Gabriella Sica to bring back the work of Prestigiacomo; the support from the poet’s brother, Nunzio, who sadly passed away last year; and the desire of the mayor and the community, particularly the younger component, to focus on culture to release new energies for the future.

The process of cultural regeneration: the protagonists

Who are the key players in this project?

There are two key players: the poets who come from all over Italy and the Maurina community.

The poets and critics who come to San Mauro Castelverde each year are enthusiastic agents of a process of cultural regeneration based on the civic function of poetry. Poetry can thus return to express a vitality of its own, which is not that of the text as a function of the critic within a closed system, but is the vitality of a message that enters the fibers of the world and shakes them.

The small Maurine community then is at the center of the project because it not only “receives” the Festival but also co-designs it, becoming its protagonist. The local community is very much present, especially the local young people who take care of logistics and communication, the various associations that do their best to organize tours of the village, the art groups, the local shop owners. An entire village, in other words, comes together and recognizes itself in the Festival.

The Festival: an occasion for meeting and celebration

The Paolo Prestigiacomo Festival, which reaches its ninth edition this year, is thus an opportunity for locals and non-locals alike to meet, but also to celebrate poetry and the land.

The moments that characterize the Festival are diversified and aim to involve a diverse and numerous audience. Poetry and theater workshops aimed at local schoolchildren, poetry conferences for scholars and experts, poetry readings open to all and various moments of knowledge and discovery of the area are organized. It all culminates with the final evening of awarding prizes to the winning poets in the presence of an entire town that gives due recognition to the poets whom the prestigious jury, after months of careful readings, identifies as winners.

Poetry as a tool to overcome distrust

What was the biggest obstacle you encountered?

The greatest difficulty was to elicit the involvement of the local community. Paolo Prestigiacomo, in artistic-literary terms, had generally been forgotten, and poetry does not generate much enthusiasm, especially in a small community that had always been devoted to agriculture and animal husbandry.

Then the contagion happened, in a twofold direction: we became “maurini” and the maurini, as in a silent gift, opened themselves to the invitation of poetry. As always, skepticism and distrust were overcome not in the abstract, but from the spontaneous and intense building of rewarding human relationships.

Festival as a system activator of cultural regeneration space

What are your goals?

Our goal is ambitious: to co-construct a future for San Mauro Castelverde.

The fundamental goal is to recover as a community the ability to pool positive and constructive values and visions. There is a need to re-construct possible spaces of recognition and operation.

There is no future without what scholars call “place consciousness“. Our goal is to reactivate it, to give it new breath, to trigger a shock that can keep away the torpor, mistrust and skepticism that often affect those who live in places of the margin, as is a mountain village, albeit a beautiful one with great potential, in the interior of Sicily.

More specifically, the desire is to make the Festival, with all its places, a system activator, integrating the different spheres of life and work that distinguish the Maurine community: the agro-economy, tourism, and local micro-enterprise with an artisanal character.

The future of the project: a multifaceted and aggregative space

How do you envision the future evolution of this initiative?

The future for us has taken the form of the Paolo Prestigiacomo House of Poetry.

The core of the new space, housed in a historic local convent, will consist of Paolo Prestigiacomo’s vast and valuable personal library. The offerings of the House of Poetry, which will also be a study room and co-working space, will be integrated with the borough’s various activities, focusing on those marked by a peculiar cultural bent. We are, for example, already at work with the creation of a “Paolo Prestigiacomo” tour itinerary, under the banner of a narrative of the borough operated from within.

The House of Poetry will propose a diversified range of activities, with a specific focus on the involvement of the local population and the entire Madonite district, in open dialogue with qualified external parties, as a function of the dynamization of local cultural, relational and recreational life that will stimulate further activities of engagement and participatory care of the territory.

If you want to learn about the “Farm Cultural Park” project, another Civic Place of Fondazione Italia Sociale, click here