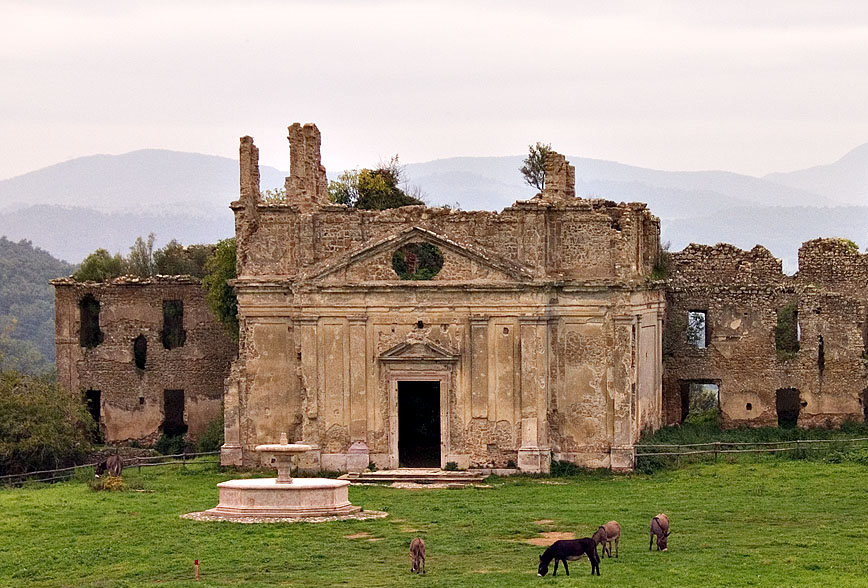 Monterano, city of ghosts and celluloid.

“A city is like an animal. It has a nervous system, a head, shoulders and feet”.

Well, Monterano seems to have been made on purpose to feel this quote sewn onto it with wrath: a fierce and unforgettable place, endowed with a centuries-old body that shows its wounds to the sky together with its beauties, with strong shoulders but feet that over the centuries have often proved to be made of clay. A small great city that, far from the delirium of the official routes, seems ideal to shock the heart of even the most reluctant of travelers. They call it a “ghost town“, but isn’t every love story also a ghost story?

Monterano, between glory and decadence

Once a prestigious feud of important families, today Monterano is a treasure trove of ruins hidden by the vegetation that lies to the west of Lake Bracciano, on a hill of tufa stone set between the gorges between the Monti della Tolfa and Monti Sabatini. The origins of the village date back to Etruscan times, and see succeed each other first Roman and then Lombard dominations, both eager to exploit the strategic location. Monterano reached its maximum splendor in the Middle Ages when it became one of the most important centers of the Sabatino area. The territory then passed from hand to hand between noble families such as the Anguillara, the Orsini, and finally the Altieri, and it is thanks to an Altieri, Pope Clement X, that Monterano assumes an incredible prestige and is populated with numerous architectural and sculptural works of a young Bernini. At that time Monterano was a place of beauty and freedom. It was a space that welcomed artists from anywhere; in its narrow streets, people greeted each other, recognized each other, and lived together as a community. Monterano was pulsating with life, men, and culture and seemed to be the master of its own destiny.

With the death of the Pontiff, however, begins a slow and inglorious agony that leads the small village towards decadence, accelerated by a malaria epidemic first, and then by a devastating plundering by Napoleon’s troops. In the 18th century, there is almost no trace of Monterano: neither of the town nor of its possible future renaissance.

What to see in Monterano

Read in this way, the history of Monterano seems like a movie: made of epics, moments of glory, and tremendous defeats that characterize, as if crystallized, the almost unreal scenario of today, where Bernini’s works coexist with uncultivated forests and noble palaces observe horses and cows grazing. The melancholic remains of the town that once was are immersed in woods of centuries-old oaks, where it is possible to enjoy the silence and quiet while walking towards the high ground that hosts the historical site. Here, the first decadent wonder that one encounters is the ancient Roman aqueduct, which looks like a giant gateway to the city; then going up towards the nucleus of Monterano, one begins to glimpse the ruins of what remains of the architecture once cloaked in celebrity and splendor, first of all the baronial palace of the Altieri family, one of the works that the genius of Bernini conceived and put in place and that, despite the sunset that has hit its walls, is still full of intense charm. At the borders of the palace, it is also possible to see a large lion sculpted on the top of an original fountain, also by Bernini, which for its extroverted features is known as the Capricious Fountain.

The spirit of Bernini in Monterano echoes everywhere because he also designed the seventeenth-century Convent of St. Bonaventure, the most famous building in Monterano, which now stands attached to a church now overgrown by vegetation, as an emblem of a landscape that inspires both nostalgia for the lost prestige and absolute pride. All around, the lush nature is dotted with Etruscan tombs, caves, and bubbling pools of water, testifying to the volcanic activity of the area. The Regional Natural Reserve Monterano, established in 1988 and subject to various improvements over the years, in its thousand hectares includes the area around the ruins, completely reclaimed, and what remains of the ancient monuments, restored and made safe. From a natural point of view, it is one of the most representative and intact corners of Tuscia Romana, characterized by hilly woods, volcanic gorges, meadows, pastures, and by the crossing of a waterway, the Mignone River, included in the Sites of Community Interest. This heritage dialogues today perfectly with those who decide to visit it through the language of silence: here there are no lighting systems, no bars, no restaurants.

Monterano, however, speaks to us not only through its quietness but also with the language of cinema which – dotted with visions, dreams, and desires – has baptized Monterano as the location for numerous films including the colossal “Ben Hur” (1959) and three comedies signed by Mario Monicelli: “Guardie e Ladri” (1951), “Brancaleone alle Crociate” (1970) and “Il Marchese del Grillo” (1981). Hidden among chariot races, improvised armies, and fallen nobility, the spirits of Charlton Heston, Vittorio Gassman, and Alberto Sordi still live in Monterano: no one knows where, but they are there. You will want to look for these ghosts once you arrive, with the eye that imagines their past; but, instead, you will have to do it by instinct, losing yourself among reflections and shadows as in the words of Walter Benjamin:

“Not knowing how to orient oneself in a city does not mean much. To lose oneself in it, as one does in a forest, is the real thing to learn”.