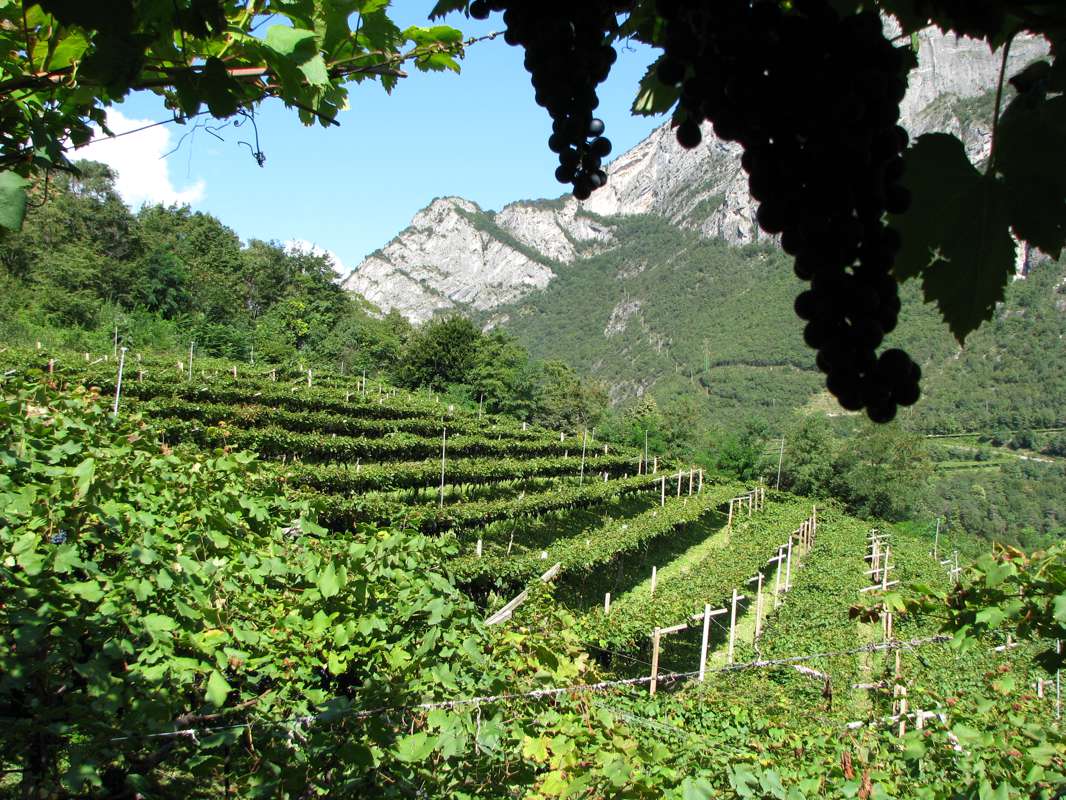 Teroldego Rotaliano: the vine that tastes like legend, worthy of a fiction

Teroldego is a wine that smells of legend, better and more than fiction: a wine with a story worthy of Game of Thrones, which fortunately for you can now taste even without necessarily retracing the deeds of a daring character of the Seven Kingdoms.

The Legend of the Dragon’s Blood

The grapes of Teroldego, says the legend, would in fact derive from the “Dragon’s Blood”, recalled to life by its deep red color, and purple hues. The legend is linked to a dragon, called “The basilisk”, who was killed in the caves of the hermitage of Castel San Gottardo, overlooking the town of Mezzocorona, by the noble knight Firmian, thanks to a clever trick.

Count Firmian confronted the dragon with a mirror and a bucket of milk: the dragon immediately noticed the bucket of milk and began to drink it with gusto, then raised his head and that’s when he saw… another dragon! Identical to himself, in every way. He started whistling, moving, shaking, turning. His double reflection performed exactly every move he made. The count then took advantage of the beast’s moment of distraction, jumped out of his hiding place and, with all the strength he had in his body, stuck his sword in the belly, the only vulnerable point of the monster.

Specifically, the origin of the vine is traced back to the fact that the dragon, defeated and carried as a trophy, yielded his blood to the ground which then generated the vine, its grapes and therefore this powerful, fragrant and complex wine. A link with the myth, and with quality, that can still be found in one of the hypotheses about the origin of the name “Teroldego”, indicated as “Tiroler gold”, that is the gold of the Tyrol; alternatively, always on the border between reality and mystery, there are those who want it descending from the Tirodola vineyard, coming from the Verona area but disappeared in the mists of memory and today no longer cultivated.

Legend aside, history says that already in 1300, at the time of the Council of Trento, the cardinals gathered were served this ruby-red wine, full-bodied and soft at the same time; then we find the Teroldego as a faithful companion of Franz Joseph, who never missed it even during his long journeys from one corner to another of the Habsburg empire.

The places of Teroldego

The close link with history translates, admirers say, also in its longevity, managing to express the best of itself even after spending a decade in the cellar.
In its power and alcohol content, Teroldego is an important, unique wine, inextricably linked to its terroir: that slice of Trentino’s territory, the Rotaliana plain, which straddles the municipalities of Mezzocorona, Mezzolombardo and San Michele dell’Adige. Sheltered from the north winds by the massive coverage of the Alps, the Rotaliana plain is characterized, in its geological formation, by the alluvial sediments brought by the Noce stream and the Adige river, which make the soil in this area very similar to that of the hills, therefore rich and suitable for viticulture.

Teroldego has the great merit of having opened, about thirty years ago, the way to the revaluation of the autochthonous vineyards of Trentino: it was in fact the first wine of the Province to obtain the denomination of controlled origin, in the Seventies, and still today it is one of the most characteristic red wines of this territory. An intense, but never cloying wine, with a vibrant acidity that supports its propensity to age.

The Teroldego, once poured into the glass, is capable of releasing hues, aromas and scents truly worthy of the magic of another world: the ruby red turns progressively to garnet depending on age, revealing scents from cherry to berries, with tones of almonds and plums, touching the nose with scents of roses and violets as well as a final spicy vein.

Although it is a robust wine, for its balanced fruitiness – with intense notes alternating with slightly balsamic mentholated vegetable notes – it lends itself to various combinations: from tasty cheeses to grilled red meats and even sweet and sour game. In its “Riserva” version, characterized by prolonged aging, it can also be a good meditation wine, at the end of the day, to penetrate the senses into the embrace of fantasy and dreams, or to cradle worthily the reading, or vision, of the fantastic stories of the Seven Kingdoms. And not only that…