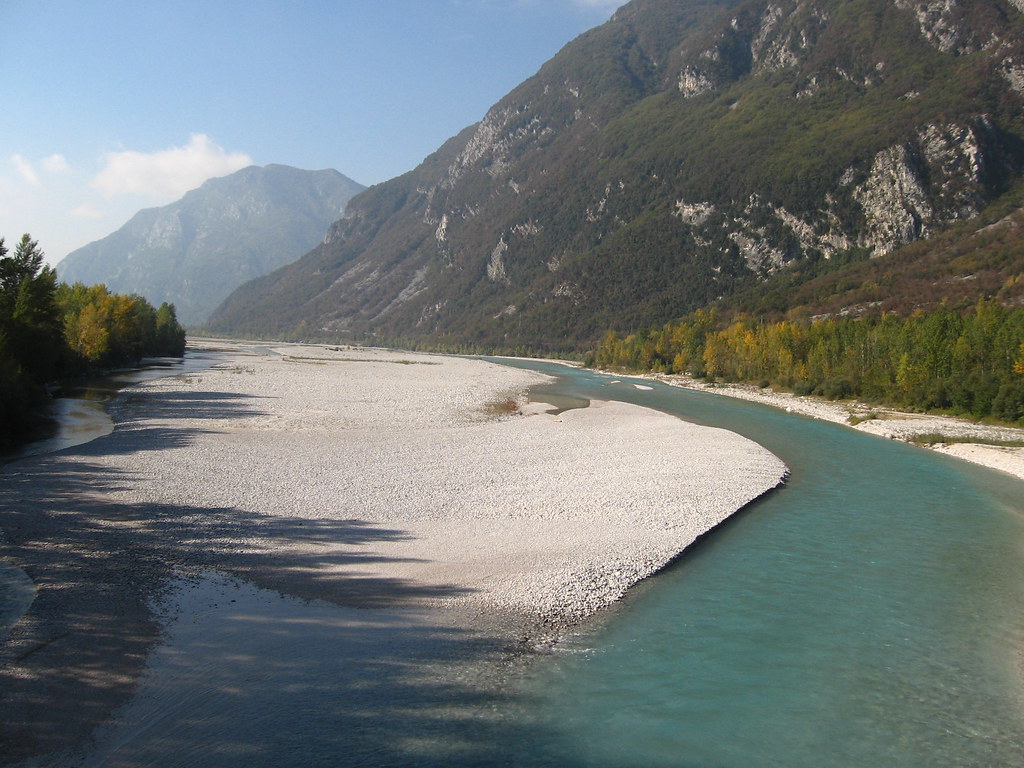 The Tagliamento: the river of Hemingway, Pasolini and Nievo, 60 years after Hemingway’s death

From Ippolito Nievo to David Maria Turoldo, passing by Pier Paolo Pasolini and Ernest Hemingway, the memory of the countryside of lower Friuli has inspired important novels and passionate poems. The absolute protagonist of this landscape is the Tagliamento, the last great river in Europe to preserve its natural ecosystem and its spectacular structure of intertwined canals. Around its course, literary evocations are played out in a thin handkerchief of land: the Varmo river, which flows nearby and is also the title of a novella by Nievo that anticipates his masterpiece, “The Confessions of an Italian“; a little further on is Sedegliano, where Father Turoldo was born, and on the other side of the river is Casarsa, the birthplace of Pasolini; from here on, all of Friuli (and the Veneto) traveled by Hemingway in his life and in his novels inspired by our country.

The areas of the Tagliamento in literature

In this vast and silent plain, inhabited by a silent and strong population, the Tagliamento is water that becomes history: it is peace after the war, it is amazement in front of nature that resists, it is the rediscovery of oneself. It has been called “little big river“: small because of its short length (only 178 km, of which the first five-sixths flow entirely in Friuli and the remaining part borders on Veneto), big because the Tagliamento is one of the rare European rivers that still preserves a naturalness that accompanies it from its sources, located near the Passo della Mauria (at Forni di Sopra, in the province of Udine), to Ronchis di Latisana, almost 30 km from its mouth in the Adriatic Sea. A river that gathers in itself the impetus and the soul of its tributaries which, as a tribute, incessantly pour in its riverbed not only water but also a varied and infinite quantity of rocky fragments undermined and taken from the mountain reliefs that in the sun assume unique and magical reflections.

Once it has reached the plain after having completed the mountain section, the Tagliamento uses the open spaces to show its best: its gravelly skeleton furrowed by infinite natural mosaics, perennial lymph, and inexhaustible source of lyrical and literary inspirations. Here, the memory of the bond that Ernest Hemingway had with the land that overlooks the two banks of the river is still alive. A memory that starts from the front and the war and evolves out of the mud until it touches the noble dwellings in the valleys, in the lagoon, in the pinewood, in the canals. These are fascinating places that can still be visited today, in the valleys and along the coasts between Lignano, Bibione, and Caorle, in the pinewood and on the beach of Lignano Sabbiadoro, with a stop in San Michele al Tagliamento, in the green where what remains of the suggestive “Villa Ivancich” is immersed, the large residential complex that inspired “Across the river and into the trees“, the famous novel set in this small world.

Why Hemingway became attached to the lands of the Tagliamento river

But what bound Hemingway so much, and so deeply, to this borderland? Probably the acumen and the love for every form of life, which led him to discover and fall in love not only with the landscape but also with what it contained. Hemingway loved the sea, of course, but he also lived with a lucid curiosity the fascinating and sometimes crepuscular places he traveled through, fixing not only their grace but often also their decline, evoking their strength and fragility, both faithful connotations of the characters in his books. A nature, a land, a river that Hemingway liked because they speak of man. A place of memory that still shows some stigmata of the important wartime events that took place there between the end of the nineteenth century and the beginning of the twentieth century; because, if we all remember the First World War essentially as a conflict played out in the mountains, in the trenches, it is instead in the furrow of the rivers – the Isonzo, the Piave and the Tagliamento – that the destiny of the conflict as far as Italy is concerned was played out.

The enogastronomy of the “little big river”

The war. The hunt. The sea. To encompass Hemingway in a few words, the only thing missing is the table, as a mystical symbiosis of food and alcohol. It is therefore not a stumbling block to note that the lands washed by the Tagliamento river are home to some of the most interesting gastronomic products of Friuli Venezia Giulia. Being a plain area, local producers have looked for the best positions for their vineyards in order to get grapes suited for a production in line with the high standards present both in Veneto and in the rest of Friuli, refining autochthonous grapes where the vicinity of the sea and the salty breeze contribute to give a characteristic minerality. On the gastronomic side then, the Tagliamento brings downstream meticulous suggestions that arrive at sea level moving from the various corners of the Friulian territory: From smoked ricotta to ancient apple varieties, from the sweet garlic of Resia (the stok) to varhackara, a mixture of white lard, speck and smoked bacon aged in stone tubs – typical of Timau carnico and entered last year among the Slow Food presidia – to arrive at one of the virtuous examples of local resilience: the Pancor, a bread made with a flour obtained from the bark of alpine fir and which smells of the forest.

The cuisine of Friuli is poor, the result of a cultural and anthropological background similar to that of the nearby Veneto region. These people are used to doing a lot with little, and for this reason, they have made the “cicchetto” a gastronomic strategy. For non-Trivenetians, the “cicchetto” is a taste, an appetizer, indissolubly associated with a glass of wine: when you go to a cicchetteria, on the menu you will no longer find first courses, second courses, and side dishes, but only a list of courses offered in small or half portions: cicchetti.

“I like it here and I would stay for a long time” said Hemingway before leaving Friuli for the last time on April 15, 1954. Perhaps in his heart, he would have wanted to say “I would stay forever”. It is no coincidence that on July 2, 1961, the day he committed suicide by shooting, a few hours before doing so he sang with his wife Mary “La mula de Parenzo”, a typical folk song of Istrian origin but adopted throughout the Triveneto as a true hymn. It was almost a testament, a final farewell to his beloved Friuli: a land that he obviously could not forget until the end.

Download Stendhapp and discover the places of literature throughout Italy