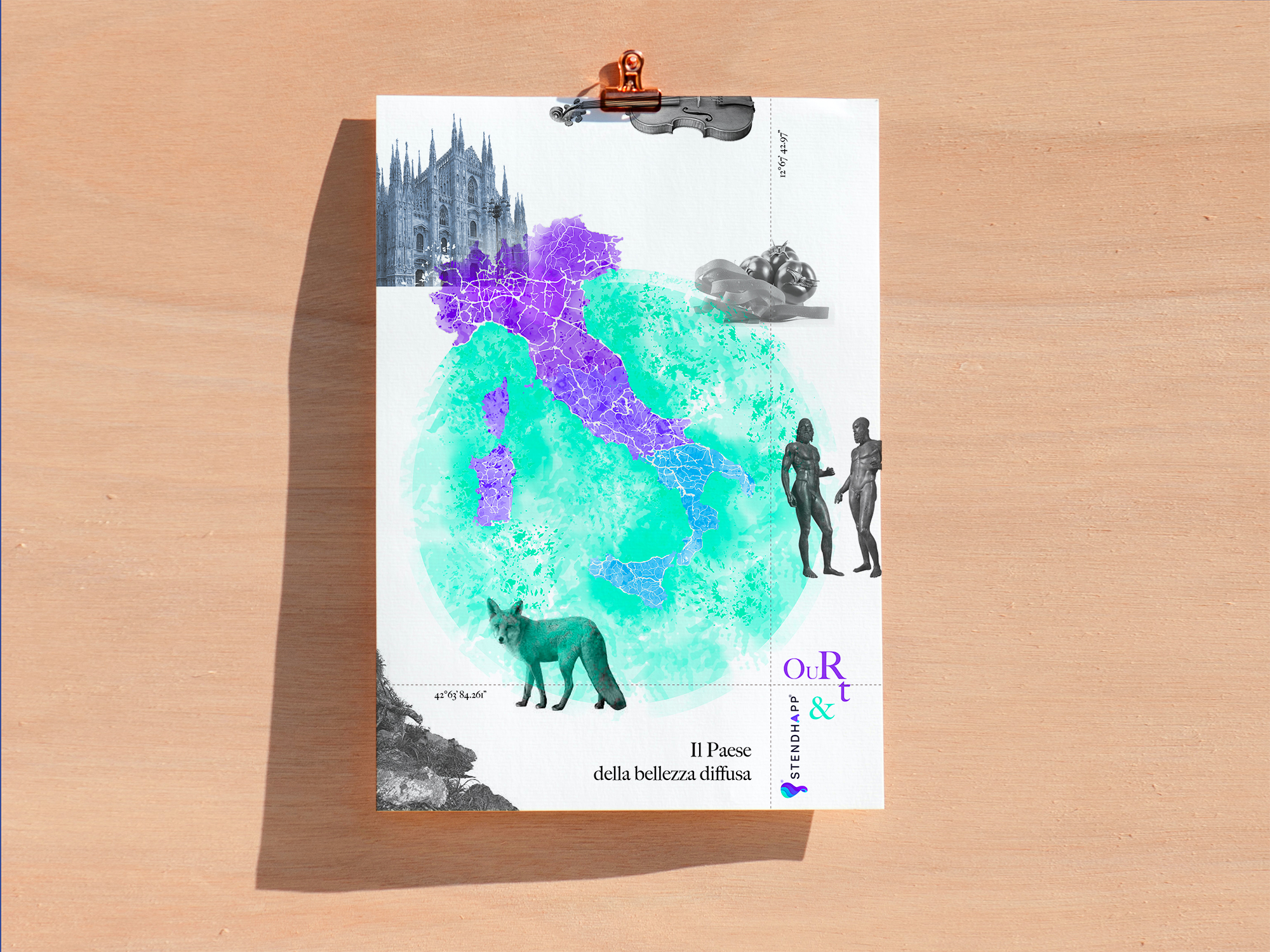 We first got to know her creations, then her, the graphic designer Giulia Porfiri, who created the OURt project: the geographical map of a place that is important to us, like a painting, to be personalised with words and colours chosen for their meaning.

We immediately felt a great affinity with this particular geography of memories and emotions that maps the places in our country, so we contacted her: so a collaboration was born and the map narrating Stendhapp, our cultural heritage app, was born, also; we had a chat with her to find out more about OURt and how she goes about her creations.

Your maps suggest the value that a certain place can have for people, in their own city or while traveling: how did you come up with the idea of creating illustrations inspired by memories with geographical representations?

OURt was born out of a dream and a gift to a special person, at a time when I felt I wanted a personal project; it was also born out of my knowledge of graphic design, architecture and urban planning.

I remember dreaming that I was in a gallery with coloured maps inside: it was a bit like an intuition, a vision. I put this vision on paper: the first thing that came to my mind was to draw the place where I met my partner; it was the first map I produced for OURt, I gave it to him as a present and he was very surprised, so I started to imagine how it could be for a person to give this object as a present: each map could be personalised with colours, phrases, something symbolic in the relationship and geographical elements such as territorial coordinates.

The name is a play on words between ‘our’ and the sound generated by the final t, ‘art’, hence the claim: our art.

Which technique do you use for OURt creations?

It starts with classic maps, processed by removing lettering, street names and treated as if they were paintings. Unlike other prints, they are not automatically generated: each OURt is one of a kind, there is a customisation work starting from personal histories.

In general, what are the most popular locations for your creations? Neighborhoods? Foreign or Italian cities?

In a couple of years I have ranged quite a bit, but I have mostly worked on requests about neighbourhoods; the places take on value in relation to an important moment for those who want to give the map as a gift: they’re mainly those where the couples met.

What should anyone do if they want to give OURt as a gift?

Just go to OURt’s website: the most popular map is called Unique, in a form you can enter place and colour, add an important date or phrase; with Match, instead, you can define two maps that will be placed next to each other in the illustration; with Half you can create two customisable halves of the same map, one to keep and one to give away.

There are as many possibilities as there are stories that can be told.

If the important memory is a photo, I can work on it like a painting, and I can add spatial co-ordinates and other personalised elements.

Stendhapp and OURt have a lot in common: the desire to map places of beauty, the idea that places of cultural value are precious and should be experienced fully, the desire to involve anyone who wants to contribute; tell us about the illustration dedicated to Stendhapp: where did you start from and how did you choose the figurative elements associated with the map?

When Francesca – one of the founders of Stendhapp – asked me to draw a map dedicated to the app, at first I thought of Milan, where the project was born, but since it pursues the dissemination of Italian cultural heritage, the idea was to represent Italy: it was the first time I was drawing an entire territory, so it was interesting to use the colours of Stendhapp and it was also stimulating to add the extra touch of elements representative of Italian culture: I included the Cathedral of Milan, naturalistic elements and some typical gastronomic ones, all the widespread beauty that Stendhapp wants to highlight through the app.

If you had to draw a map of your fondest memories, which Italian location would you choose?

I would not represent a specific place but create a story with several places; lately I was thinking about the idea of developing a map on several sheets, as if to create a path and this could be a new project for OURt. I would definitely represent Rome, where I was born, places that were decisive for my growth and those of my most important journeys.

This meeting between visionary mappers, as we like to call ourselves, has confirmed this common feeling for the preciousness of places and the desire to keep track of them on a map. A collaboration has taken shape: we are certain that it will go beyond this beautiful map of Italy, the country of widespread beauty.