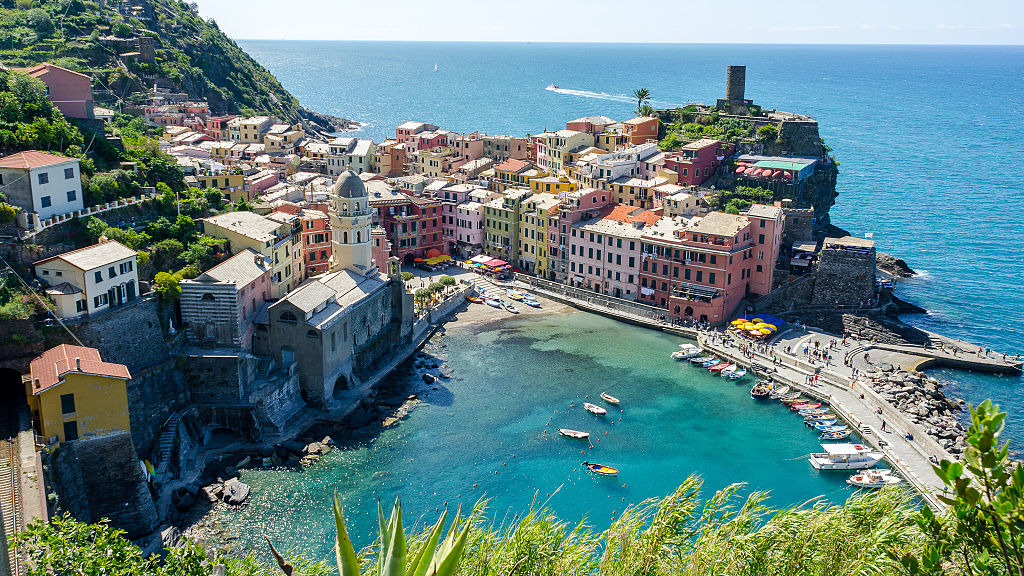 There is a book by Eugenio Montale, published in 1969 and very little known, which is entitled “Fuori di casa” and collects the travel itineraries of the great poet, letting us understand how much he loved Cinque Terre; in fact, for Eugenio Montale those “backs of hills and sky” of Liguria, were “his Cinque Terre”.

With its almost 3900 hectares, the Cinque Terre National Park is the smallest in the country but, at the same time, the most densely populated, with about 4,000 inhabitants divided into five villages linked by history, and by a fascinating and tenacious nature.

If Riomaggiore, squeezed between two steep terraced hills sloping down to the sea in cliffs, impresses with its vertically built and delightfully coloured houses, Manarola is a charm because it is an eden of vines and olive trees. Then there is Corniglia, the pearl set on the cliff, an ancient Roman village, almost inaccessible from the sea, with a long and rich agricultural tradition; and again Vernazza “la maestosa”, a medieval jewel made of magical and mysterious narrow streets among the houses painted in pink, red and yellow: a multicoloured spot of a seaside village, classified among the first hundred most beautiful villages in Italy.

Last but not least, there is Monterosso, so loved by Eugenio Montale, a colourful village with a strong medieval trait: “rocky and austere”, the great Genoese poet defined it.
Riomaggiore, the institutional seat of the Cinque Terre Park, is the first of the five villages coming from La Spezia and perhaps represents the most tortuous and narrow of the five, since it follows the steep covered gully of the Rio Maggiore stream, the ancient Rivus Major, from which it takes its name and which determined the development of the settlement. In its morphology, Riomaggiore extremeizes the character of the Cinque Terre and, therefore, in some way paves the way to the others: in fact, it is composed of parallel bands of colourful Genoese tower-houses arranged on several levels, whose unmistakable feature is the presence of two entrances, one in front of the caruggio, the other at the back at the height of the upper road leading to the cultivated terraces.

Riomaggiore, coming from the West, is therefore the door to that still enchanted and unique world represented by the Cinque Terre but it is known, or can even be imagined, that following the thread of Montale’s poetry the normal categories of geography, experience, feeling may change and update in the name of poetry.

In the Cinque Terre, UNESCO site since 1997, the Nobel Prize winner loved to spend days and days watching the sea, the storms and the changing seasons, to fix them in unforgettable verses.

Here his presence is still tangible or, better still, you can still see these places with his eyes, thanks to his words. If the greatest vertigo of this encounter is certainly in “Ossi di Seppia”, in truth through every verse of Montale it is possible to know, and recognize, the Cinque Terre, so much so that, to pay homage to him, the Eugenio Montale Literary Park, in Monterosso, was inaugurated on the occasion of the 40th anniversary of the Nobel Prize. The fulcrum of the Literary Park is the poet’s house, the summer residence, known as Villa Montale, which he himself called “the yellowish pagoda” or “the house of the two palms”: it is a place that symbolizes an attentive, meticulous and excited tourism, which is far from the noisy unconscious wandering, because it invites you to concentrate on silence and beauty, which is everywhere.

From here, thanks to this little great miracle of evocation, the natural landscape of the Cinque Terre, so unique and peculiar, where the mighty terraces seem to plunge down to the sea, becomes “cultural” and “literary”.

Following the traces left by the poet along the way, it is possible to perceive the corners or viewings that made him immortal and immerse oneself in the splendour of the landscapes he sang; from “Meriggiare pallido e assorto” to “La casa dei doganieri”, from “La Punta del Mesco” to “I limoni”, Montale’s verses are permeated with the climate of the Cinque Terre, and are a real guide to breathe them in deeply as in an encounter between visual and sound landscape.

Yes, because Montale, as a good Ligurian you could say, is certainly one of the poets who has been able to better translate silence into words. There are some of his verses that scream although silent and seem to summarize in their short breath the life to which they belong: fragments that collect and keep in their chest, intact, the sound and the sense of poetry and the land from which they come.

Words, but even before that, perfumes, images and suggestions have given Montale’s gaze on the visible a great evocative and questioning energy. Because to talk about an encounter is to participate deeply in life, or in nature, and accept its many questions and few answers. And to remain in the magnificent expectation of getting moved.

That’s it, traveling through the Cinque Terre all this, luckily for us, becomes possible at every step.