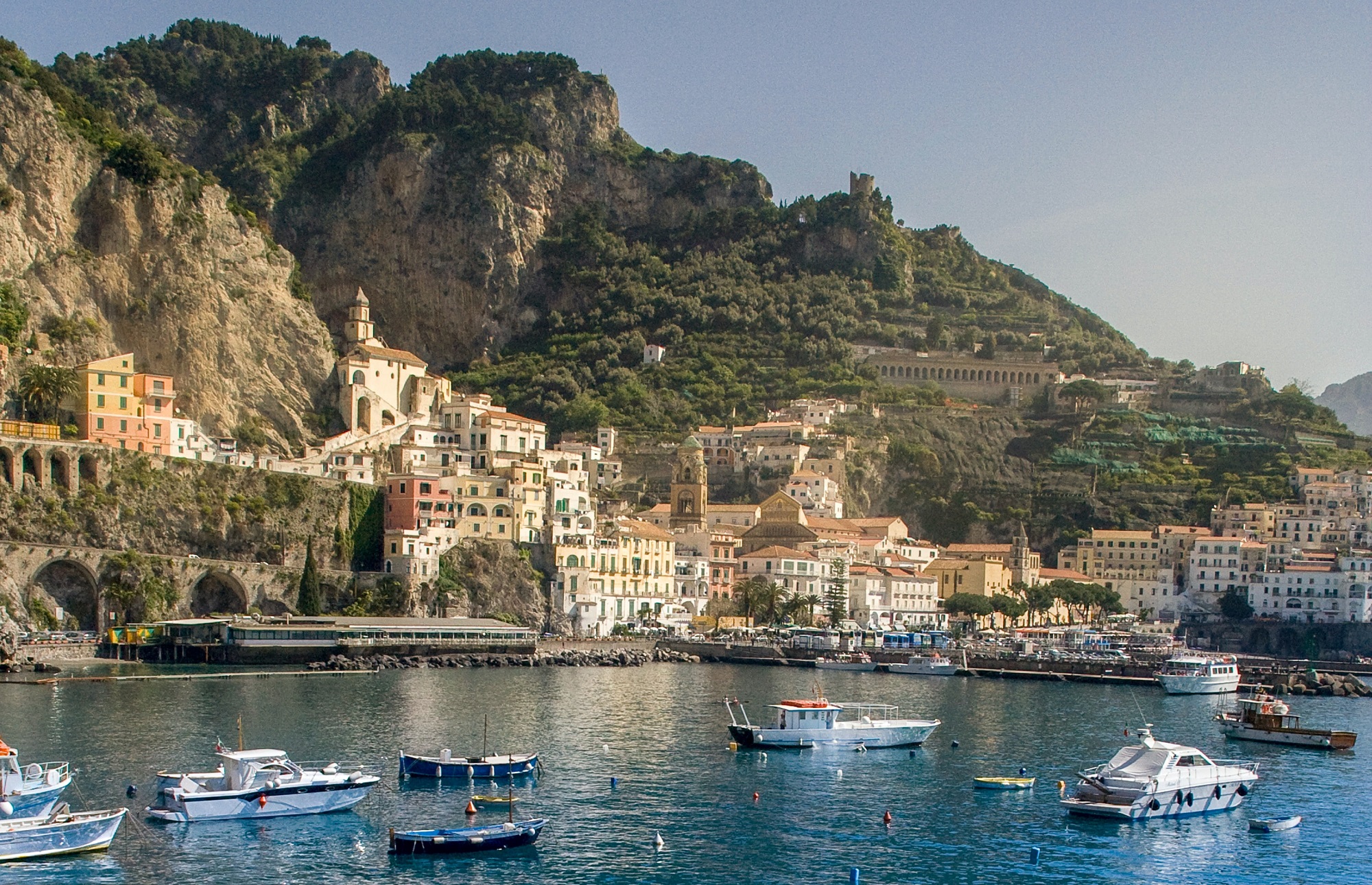 “Here is the garden we always and fruitlessly look for after the perfect places of childhood. A memory tangible above the abysses of the sea, suspended on the leaves of the orange trees and sumptuous cedars in the hanging gardens of the convents”. This is how Salvatore Quasimodo described Amalfi in his “Praise”.

Since 1997 the Amalfi Coast, of which Amalfi is the main geographical and historical center, has been recognized as a UNESCO World Heritage Site. The toponym Amalfi is certainly of Roman origin (its coat of arms bears the inscription Descendit ex patribus romanorum) but with two hypotheses: derivation from Melfi, a city in Basilicata, whose refugees arrived on the coast founding the city, or derivation from the Roman gens Amarfia (1st century AD).

The Republic of Amalfi, later the Duchy of Amalfi, was an ancient state governed, between the 9th and 12th centuries, by a series of dukes, sometimes called doges in analogy with the rival Republic of Venice. Together with Pisa, Genoa, and Venice, Amalfi is one of the most famous maritime republics and the oldest, and has been, for two centuries, the most powerful among them.

The decline and the legendary ruins of Amalfi

Amalfi reached its maximum splendor in the eleventh century, after which began a rapid, even tragic, decline: in 1131 it was conquered by the Normans of Ruggiero II d’Altavilla, the king of Sicily, in 1135 and 1137 was sacked by the Pisans and in 1343 a storm, resulting in a seaquake, destroyed much of the city. Of the consequences of this destruction, the fishermen tell, between myth and legend, that still today their nets thrown off the city get stuck in the remains of the ancient buildings and of a fountain that still releases fresh water into the open sea.

It was probably also this strong connection with myths and legends that brought Salvatore Quasimodo and Amalfi together: Quasimodo arrived in Amalfi on January 20, 1966 at the Hotel Cappuccini, and to Mrs. Anna Aielli who welcomed him the poet replied: “I am at home, madam. This is the South, my South. Here I breathe the air and perfumes of my Sicily”. Amalfi would become for him like Tindari: his landscape, the islands of the god, the wind of memory recreated for him a landscape of the soul. This identification between the two lands the poet found in particular in the overhanging road towards Ravello where the Moorish signs in the noble palaces were a reminder of his Arab Sicily; that Ravello which, together with Amalfi and Positano, represents the geographical, naturalistic, architectural and literary triptych that has nourished the timeless beauty of the Amalfi Coast over the centuries.

“Nowhere else does the crossing between land and water takes place with a mutual metamorphosis”, said Quasimodo, certifying such an incredible communion in indelible beauty.

He was echoed by John Steinbeck, a famous American writer, who described Positano as “a dream place that becomes vividly alive when you leave”. Moving on to Ravello, in the 14th century Giovanni Boccaccio praised it in the Decameron, and it was in Ravello that Richard Wagner composed Act II of the opera Parsifal in 1880 and where D.H. Lawrence wrote “Lady Chatterley’s Lover” in 1927. Also in the early years of the 20th century, Villa Cimbrone acquired fame as the favourite haunt of Virginia Woolf and John Maynard Keynes, until the more recent love for these lands by Gore Vidal, who lived and wrote in Ravello for more than 30 years, finally becoming an honorary citizen.

Returning to Quasimodo, driven by the excellent harmony that he felt with the territory of the Coast, his poetic production during his stay in Amalfi was very rich and extremely valuable: “Oboe sommerso”, “Giorno dopo giorno”, “La terra impareggiabile”, are in fact examples of clear civil poetry that will lead him to the Nobel Prize for Literature in 1959.

The death of Quasimodo, in Amalfi

Quasimodo returned to Amalfi several times, and was at the Hotel Cappuccini even on June 14, 1968, when he suffered a stroke. Perhaps it was destiny for the Sicilian poet to die in Amalfi, because in Amalfi, he said, “it is easy to forget death”. Born on the island of the Cyclops, Quasimodo died in the sea of Ulysses, lulled by the call of those muses that probably accompanied him most in his life: the beloved sirens.