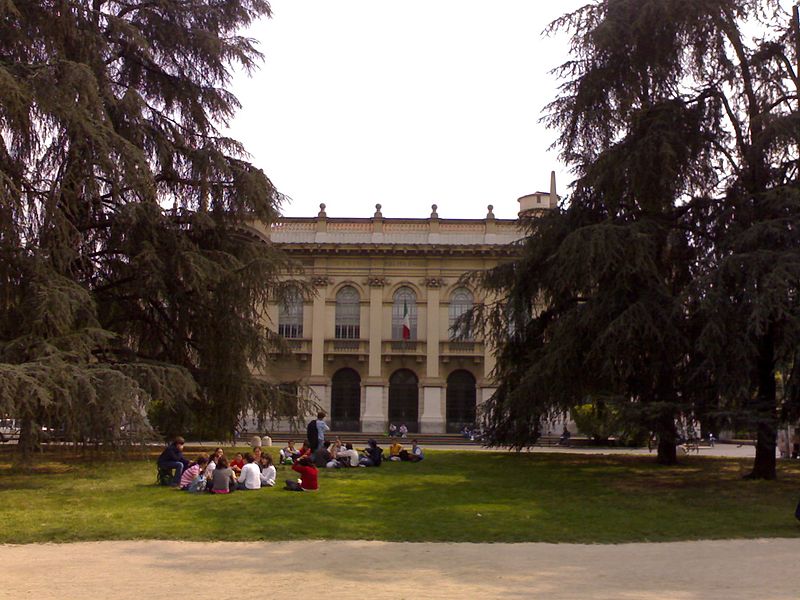 “Looking at something is quite different from seeing it. You can’t see a thing until you see the beauty of it,” said Oscar Wilde. Well, if before the renovation, a few years ago, piazza Leonardo da Vinci could only please the Milanese, today it’s become a little gem. Really worth seeing. Yes, because the Politecnico di Milano – Il Poli, as the Milanese call it – has the oldest of its buildings just here, with its imposing façade and pinnacles. The Politecnico di Milano, inaugurated in 1927 in the buildings located in Piazza Leonardo da Vinci, has expanded over the decades to include new campuses and creating a real university district (commonly called “Città Studi”) scattered among the streets Bassini, Ponzio, Mancinelli and Colombo.

Where Scerbanenco set his books

Before being called as we know today, piazza Leonardo da Vinci was named after Roberto Ardigò, a philosopher who committed suicide in 1920 at the age of 92. So from the beginning, there is a thin thread that links genius and drama in these streets… a thread we can go and reveal thanks to the pen of one of the writers who set the heart of his novels in the middle of these streets: Giorgio Scerbanenco.

Scerbanenco is the great master of Italian detective storytelling, or “noir”, as you would say today. And the deeds of his characters are often engraved in the maze of traverse streets of Città Studi because that was the place in Milan where he spent most of his life. In Piazza Leonardo da Vinci 10, on the corner of Via Pascoli, is the dwelling of Duca Lamberti, his most famous and beloved character, but in reality here Scerbanenco secretly went to see a much-loved woman, and we will find her in many of his stories.

Once upon a time there was Città Studi

Scerbanenco could not choose a better place to give a home to his protagonist: Piazza Leonardo da Vinci was the extreme offshoot of the bourgeois city, creeping in the working-class suburbs, back in the seventies kingdom of factories and workshops, but also of organized crime. A man like Lamberti would never have lived in the center, protected by the Bastions: his apartment had to be an outpost towards the outside, a bridge between two worlds. A lookout point from which, walking along the tree-lined stretch of via Pascoli, we arrive in piazza Carlo Erba, where the old publisher Rizzoli, Scerbanenco worked for during almost twenty years, stood. From here, taking via Plinio, retracing the steps of Duca Lamberti in “Venere privata” we reach the bar Basso, where he met for the first time Livia Russo, the woman he fell in love with in a cursed and tragic way. With its red sign with retro characters, the interiors with wood paneling and crystal chandeliers, the Bar Basso looks like a piece of Paris that has fallen into the Milanese ring road: to be there with Scerbanenco just imagine it with the fog enveloping the outside tables, along the sidewalk, and a beautiful woman with long hair and lipstick on her lips sipping a drink; maybe a Sbagliato, a cocktail that was invented right here, in those same years.

Città Studi is a beautiful area of Milan, and hasn’t changed much since Duca Lamberti’s time: few shops, few people around, small and well-kept houses, an almost unreal silence. Maybe that’s why both Lucio Battisti and Carlo Emilio Gadda decided to live here. People of few words, who put in the right place the silence between the sentences, and who have enchanted and innovated the Italian lexicon, in music and literature.

And then, more simply, there are some days in which Piazza Leonardo da Vinci has almost poignant beauty, precisely because it’s spurious, incongruous. Scerbanenco also says so: “When one has an open window on piazza Leonardo da Vinci, with trees green again in spring, one has everything.”